How The Teaspoon Got Its Name 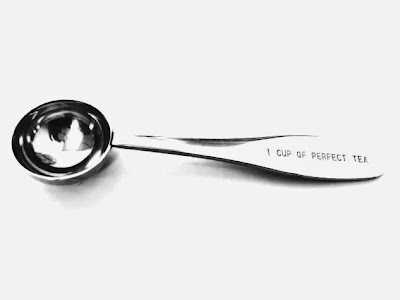 I saw it in the tea shop…silver, shiny and sleek.  It had a pocket that was round and deep.  I picked it up and found it solid and slightly heavy.  This was no dainty little spoon for stirring, but a sturdy one for scooping a measured amount of loose leaf tea.  I was hooked even before I read the inscription on the handle, “one cup of perfect tea.”  Sure enough, my new beautiful teaspoon gives me just that.


Is a teaspoon called a teaspoon because of tea? I did some research into the etymology and origins of the teaspoon to find out. The short and sweet answer is, yes. In British dictionaries, a teaspoon is defined in two ways.  It is not only defined as a measurement but “as a small spoon” used for “adding sugar to tea” and to “stir tea.”[1]  The word teaspoon is quintessentially English as the word and the spoon developed from England’s love of drinking tea as well as England’s colonial sugar wealth.

Tea was first introduced to England in the 1600s and it is commonly believed to have become fashionable due to Catherine of Braganza, the Portuguese princess[2], who became Queen of England when she married  King Charles II in 1662.  Catherine was an avid tea drinker and tea soon became a fad in courtly and aristocratic circles.[2]

Sugar, like tea, was an expensive import in the early 1600s that only rulers and the rich could afford.[3]  Whether to lessen any bitter taste in their tea or as a means of flaunting one’s wealth, tea drinkers in England, unlike China, added sugar to their tea.
Towards the end of the 1600s, tea and sugar became less expensive and more common to the average English citizen.  In fact, the first written appearance of the word "teaspoon" was in a 1686 edition of the London Gazette.[4]  The reference appeared in an ad listing a reward for a stolen "three small gilded Tea Spoons."[5]

Tea became less expensive thanks to the British East India Company.  Charles II had granted the company a monopoly over trade between England and the East.[5]  Because of the company’s increasing importation of tea from Asia, the prices of tea fell in England.[5]  Sugar also became less expensive in England as England imported ever greater amounts of sugar from the colonies in the New World - where sugar plantations were run on African slave labor.[7]

An interesting side note about that 1686 edition of the London Gazette which listed a reward for the stolen gilded tea spoons.  On the same page is another ad listing a reward for a 15 year old run-away negro boy, last seen on Christmas Day (presumably a slave).[5]  Just a reminder of the realities of 17th century world labor conditions that made the proliferation of tea and sugar so affordable to many.

Click here to find the perfect teaspoon on Amazon.com

This blog contains affiliate links (affil.) to product on other websites. That means if product is purchased using a link, we may receive some payment from our affiliate partner.