Tea Tasting in the Capital

I recently attended a tea tasting seminar organized by LivingSocial in downtown Washington, D.C.’s Penn Quarter.  LivingSocial is a web based social events network that features deals on the best things to do in your city.  I once bought a 50% discount gift card from them for dinner at a great French restaurant near me and since then I regularly check LivingSocial for more deals.  I wasn’t expecting to see a tea tasting event, so I was thrilled to see LivingSocial featuring one. 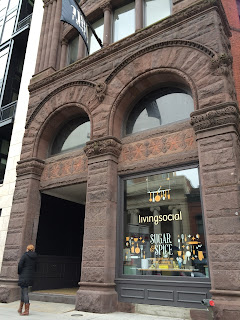 The tasting was held at a beautifully renovated Georgian/Romanesque style building at 918 F Street in downtown Washington.  It’s a majestic 1890’s building with original Seneca sandstone façade, exposed brick walls, and a cage elevator.  By contrast, the interior rooms are thoroughly modern and minimalist in style. 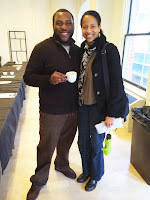 Capital Teas, headquartered in Annapolis, Maryland, co-hosted the event and provided the teas.  Their Vice President, Mr. Nkaiso Akpabio, presented the class “Five Tea Tastings From Around the World” to a group of fifty or so students.  Some attendees came with friends, many came alone, and all came to sample and learn about the teas.  Akpabio’s enthusiasm was infectious and he had the class laughing and asking questions such as: “Is it safe to drink the tea leaves at the bottom of the cup?” [Yes];  “Why do some add milk and sugar to their tea?” [taste and tradition]; and, “What is the process to decaffeinate tea?” [one way is to rinse the tea leaves with hot water before steeping]. 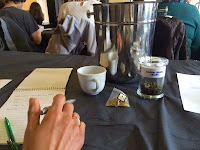 We sampled 5 teas – or 4 “real” teas and 1 tisane.  Akpabio explained that technically all “real” tea comes from the Camellia Sinensis plant.  Teas such as green, black, yellow, white, pu-erh and oolong are from the Camellia Sinensis plant.  Tisanes, on the other hand, are beverages brewed from herbs, spices, or other plants.
﻿﻿﻿﻿﻿
Of the “real” teas we sampled, the Genmaicha green tea from Japan stood out. It looks like it is mixed with pieces of popcorn! Actually, those bits are roasted rice kernels, which also burst open upon roasting like corn kernels of popcorn do.  This Genmaicha had a toasted wheat-like flavor balanced by the more earthy taste of the green tea leaves in it.  According to Akpabio, Genmaicha is considered the “People’s tea of Japan.”  Originally, the rice was used as a less expensive filler for the less affluent tea drinkers.  Now it’s popular across all segments of society.﻿﻿﻿﻿﻿

﻿﻿﻿﻿﻿The Earl Grey tea from Sri Lanka also stood out.  ﻿It smelled chocolatey.  Ironically, there was no chocolate in it.  Instead, it had vanilla mixed with the oil of bergamot and the Ceylon tea.  In general, bergomat oil is what makes an Earl Grey an Earl Grey.   Bergamot oil comes from the rind of a Bergamot orange.

The class sampled an Oolong from the Fujian province of China, an Indian Darjeeling with a TGFOP Grade – that’s Tippy Golden Flowery Orange Pekoe (we’ll cover grading in a future posting), and a Chamomile tisane from the Nile Delta in Egypt.  With so many teas to sample and lively questions and answers, the 90 minute lesson ended all too soon.


Click here to find a Capital Teas organic
Cherry Blossom Rose black tea blend on Amazon.com
﻿﻿
at 7:34 AM No comments: 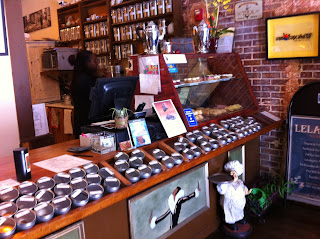 In the outskirts of Nob Hill, one of San Francisco’s most well-known neighborhoods, is the Leland Tea Company.  Nob Hill is known for its SF landmarks such as Grace Cathedral, the Masonic Temple, and the Fairmont and Mark Hopkins Hotels.  It also holds cultural institutions like the Alliance Française, which is where I was coming from after a French class when I happened upon the Leland Tea Company, a tea cafe just a block away.

The first thing that drew me to the Leland Tea Company was the French music wafting from its doorway. Naturally I had to look inside. The antique looking decor and jazzy music is reminiscent of a chic 1920’s Parisian cafe.

At the front counter, customers get to handle and smell mini-containers of loose dry tea leaf mixes to choose from. Tea names like Rhett Butler, Casablanca and Ginger Rogers fit the theme of another era. Scones and french madeleine cookies can come with your order of tea. I like that they're not too sweet. That way they don't overwhelm the flavor of the tea.

The friendly beaming personality of the owner, Will,  who created and mixed the blends himself makes your tea service truly enjoyable.  Will seems to be a very busy guy.  Each time I’ve seen him there he’s been behind the counter preparing for catered events.  Nevertheless, he goes out of his way to stop by each table to say hello and have a quick chat.  There are quite a few regulars, cool hipster types (skinny jeans and fedora hats), and he really does know them by name. Will frequently jokes and reminds customers to take a deep breath and relax because afterall, “it’s just tea!”

And the tea…there’s a wide variety of house mixed blends to choose from.  The options are arranged in order of most caffeine to least.  The tea is sourced from fair trade and organic vendors.  Custom blends infused with spices and flavors at your direction are available.  All the teas I’ve tried there taste great.  They’re served in individual pots that are timed during brewing.

It feels like a lot of thought was put into this establishment - homemade tea blends, delicious pastries, lovely atmosphere.   Here’s a glimpse in a video moment from my first visit:

Take the A Train to Harlem’s Serengeti Tea

If you miss the A train, you'll miss the quickest way to Harlem’s chic new tea salon.  Serengeti Teas and Spices sells organic teas and tea blends of dried herbs, spices, fruits and botanicals from Africa. The tea salon opened in the fall of 2013 and is located on Frederick Douglass Boulevard near 125th St. in New York City. 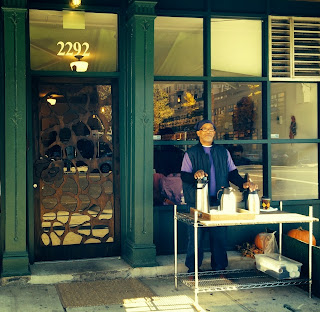 When I went to check out Serengeti Teas, two unique things stood out to me before I even entered. One, a smiling and charismatic tea barista stood outside on the sidewalk offering pedestrians free fresh and hot tea samples. And two, the salon's beautiful entry door is an art piece.  The wood and glass are designed in a pattern resembling the spots of a giraffe. 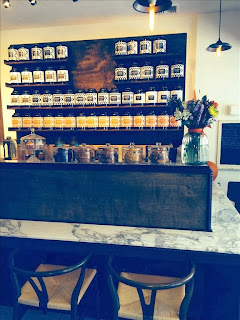 Once I entered the tea salon, a strong smell of fragrance greeted me. The salon is airy and bright with a glistening marble tea bar that gives the space a modern and sleek appearance. The artwork in the décor is evocative of Africa.

We sat at a beautiful long wooden communal table that we shared with other tea drinkers.  For my seven year old daughter, the owner recommended the Bassa Blood Orange, a tea blend of rooibos, hibiscus, dried fruits and agave.  My daughter took one sip, hummed "yumm!!" and kept drinking until the cup was empty.  A few more child friendly elements such as booster seats or kid food items could make this salon appealing to children too. 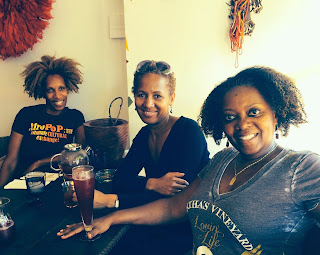 While I was visiting, a trio of ladies and self-proclaimed tea divas were also on their first inspection of this tea salon.  They were thrilled with the salon's décor as well as their tea. One diva, who claimed to be a snob from Brooklyn, said her visit to the Harlem tea salon was well worth the trip uptown.

The owner, Liberian born Doughba H. Caranda-Martin, clearly knows the business and benefits of tea. He can describe his teas – over 450 - based on their distinct flavors and he can expound upon the health benefits that the specific ingredients are reputed to have.   He attributes much of his knowledge and love of ingredients to his holistic botanist grandmother.  She was his inspiration when he started his organic African tea businesses, the tea sells on Amazon.com (affil.) as the Caranda Fine Foods Brand.

His teas are blended by hand in small batches.  Caranda-Martin explains, that machine mixing typically breaks fragile botanicals and thus jeopardizes the zenith of their flavors.[1].  Caranda-Martin creates his tea blends in what he refers to as an “atelier,” which is French for "an artist’s work shop."   Which is no surprise because the owner is an accomplished visual artist.[2]  He is clearly an accomplished tea blender as well.

Japanese sencha tea drinkers beware!  You may fall in love with the Toasted Kenyan Green Sencha – a blend mixed with lavender and cardamom.

Hagiyaki – Beauty is in the Eye of the Tea Drinker

During college, I lived for a year in Japan. I was given a special tea cup, a Hagiyaki. Hagiyaki is one of the most famous Japanese pottery types for the tea ceremony. There's an old saying in Japanese, "Ichi-Raku, Ni-Hagi, San-Karatsu (One-Raku, Two-Hagi, Three-Karatsu.)" which refers to the ranking of the ceramic tea wares made in Japan.[1] Hagiyaki is considered one of the best and it is nationally recognized as an art form. Just one tea cup can sell for approximately $400 (31,500 yen). A tea bowl by Hagi ceramist Miwa Kyusetsu can sell for $25,000.[2]

But, beauty of the teaware is in the eye of the tea drinker, and my Western eye at the time was not ready to see the beauty in this traditional Japanese pottery.


Oh! I wish that beautiful gift of Hagiyaki had not been wasted on my youthful ignorance. I tried to be polite when I accepted my Hagiyaki tea cup but what I was really thinking was, “this is the most awful cup I have ever seen!” It was a meld of melting colors and to my eye, crudely formed, like it needed to go back into the kiln after being reshaped properly. Back then, I could not understand why Hagiyaki was so prized. I have since learned that Hagiyaki is valued for “the roughness and asymmetries of form, texture and color.” Connoisseurs treasure “the accidents of color and texture resulting from changes in the clay and glazes during firing.”[3] The color of the Hagiyaki changes overtime with use, this is known as “the seven changes in Hagi.”[4] Hagiyaki is made of very porous clay which absorbs the tea and its tannins. The absorption changes the color and causes fine cracks in the glaze.  Hagiyaki enthusiasts enjoy watching and waiting for these changes to take place in their pieces.

The origins of Hagiyaki stem from Japan’s invasions of Korea in 1592 and 1597. Japanese Warrior-lords brought back skilled potters from Korea and established kilns. The Hagiyaki style flourished with the rise of the cult of the tea ceremony in Japan, developed during the 15th and 16th centuries.[5]

Just as my taste for tea has matured over the years, so has my appreciation of Hagiyaki - even though I foolishly lost my Hagiyaki tea cup within months of receiving it. Due to my love and exploration of all things tea, I now can better appreciate the beauty and artistry of Hagiyaki. I wish I still had my tea cup so I could enjoy watching the seven changes of Hagi.