Don’t think of Germany as a major tea country?  You may want to think again.
While Germans may not be known for being major tea drinkers[1], Germany is actually a power house in the tea community.  Indeed, Hamburg Germany is considered by some to be the tea trade capital of Europe because about 70% of all tea traded in continental Europe is handled in the city.[2]

How much tea do Germans drink?  The Ministry of Foreign Affairs for the Netherlands reports that Germany is the third largest tea consumer in the European Union, with a market share of 10%.[3]  East Frisia is Germany’s top tea drinking region, drinking 12 times the national average.[4]   East Frisia, a region in northern Germany, has a robust “teatime” tradition dating back to the 17th century.  East Frisian tea is typically “a thick, dark, malty tea served in espresso-size porcelain cups” with “a piece of rock sugar in the bottom and heavy cream.”[5]

As noted by the Tea & Coffee Trade Journal, Germans are known to “have a reputation for demanding the highest quality” in tea.[6] Indeed, the German Tea Association has adopted a Code of Practice for Quality Assurance.  The Code provides guidelines for tea sampling and issues requirements for pesticide examination.[7]

I visited the booths of a few Germany companies while attending the World Tea Expo 2013. 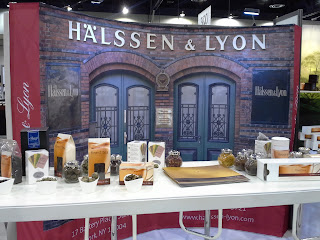