When I enter a cafe with my cousin there's a moment of angst.  I see it in his face as I open my mouth to order.  We both know what's coming.  It's to be expected, afterall, I learned it from his mother, my dearly departed tea goddess Auntie Widgie.  Like my mother, her sister, Auntie Widgie was very particular about her tea. Unlike my mother, if the water in her tea was not at the right temperature, Auntie Widgie would let it be known loudly until it was done right.  To her credit, she would try to head off that type of scene at the pass by firmly describing the steps to making her tea at the time she ordered, "Put the dry tea bag in the empty cup, pour the boiling water on top of the bag before you bring it to the table." God help the waiter who didn't follow her orders.  All 4' 8" of her would burst forth with a roar, "I ordered tea! not luke warm water with a dry tea bag on the side!"  Nothing would soathe her until the tea came back done right. 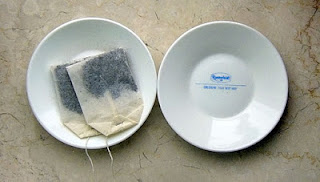 My mom's family came to the U.S. from the British West Indies where tea is a big part of the culture.  It's traditionally black tea with a little sugar and evaporated milk, not to be confused with condensed milk which is pre-sweetened.  Everyone in my family takes tea and part of it, at least for the girls in my family, is having one's tea done just so.

My mom likes her tea steeped only briefly so it doesn't become, in her words, "heart rocking."  She puts her milk in slowly pouring it over a spoon without stirring so the milk suspends in the tea liquor at different densities from top to bottom.  Then she sips it using a straw.  As a matter of fact, she carries a supply of straws in her purse just for this purpose.  A little neurotic you might say.  Just imagine watching her explain how she wants it to a waiter.

One of my sisters takes her tea at Starbucks in her own quirky way.  She has it steeped in hot steamed milk from the latte machine.  She's had quite a few...uh...discussions with the staff when trying to put in that order, but as an attorney she's used to getting her way.
Me, I like to think I'm a little more low key.  Nevertheless, I feel miffed when the water for my tea is not hot enough.  I never need to admonish my waiters because, thanks to my Auntie Widgie, I learned to head them off at the pass.  A little painful for waiters who don't know how to prepare tea.  And familiar, yet still a little painful for my cousin to sit through as he never quite got used to the particularities and quirks of the tea snobs in his family and their quest for the perfect cup of tea.