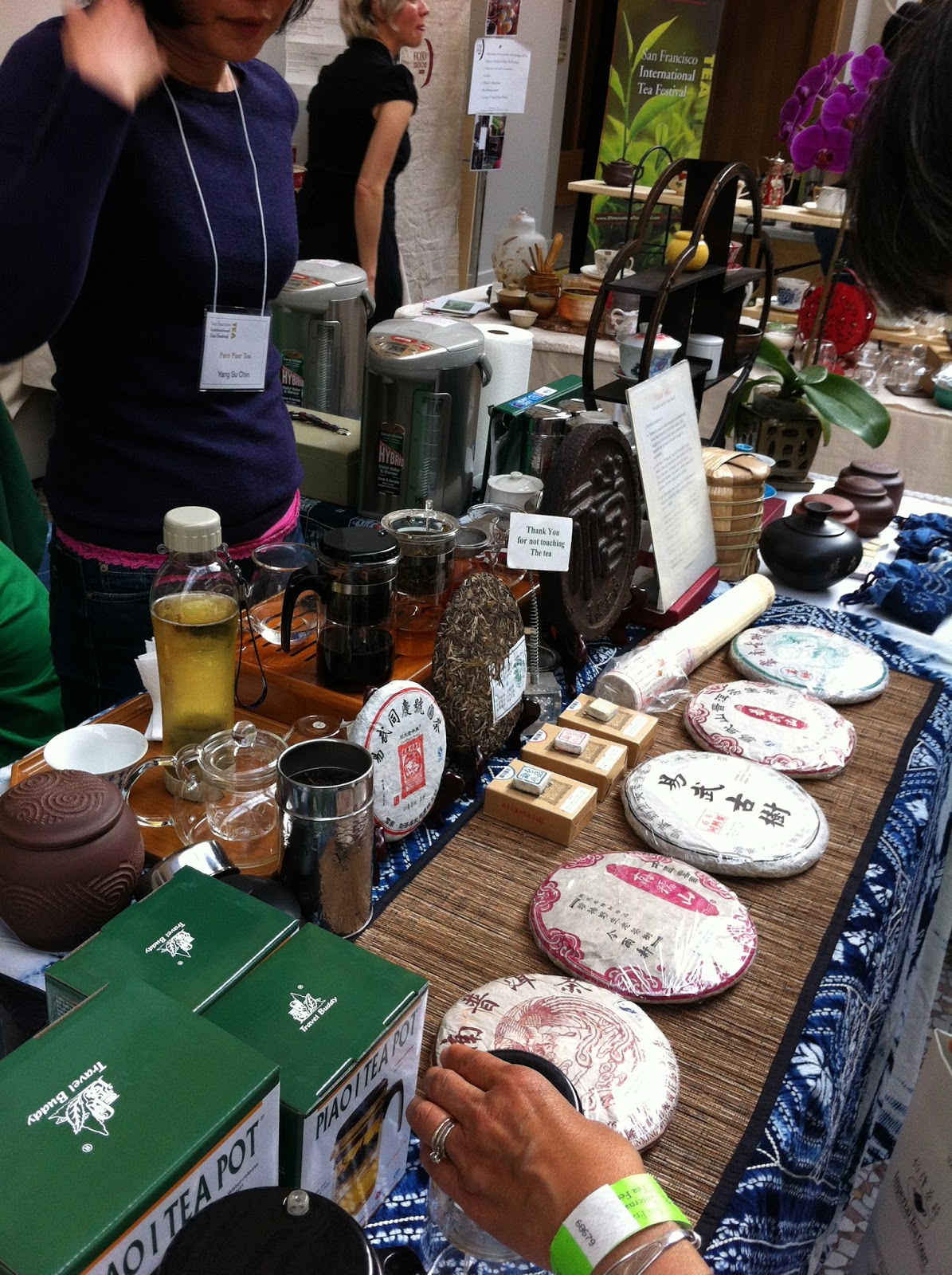 It beckoned to me from across the room at the San Francisco International Tea Festival.  It was raw, it was ripe, I was trying to avoid it.  I was having a Puer moment!  My friends kept telling me how wonderful Puer could be, but that wasn’t how I remembered my first cup. It was bitter and chalky.  Why was Puer so popular?  I had to know, so I ventured over to the table where the family run company Pure Puer was holding tastings…and I’m glad I did.

I learned from Larry and his son, who prepared for me a lovely tasting Puer, that there are two keys to a proper cup of Puer.  One is in the steeping preparation.  Puer is a delicate tea.  The water should not be at boiling temperature.  Once it reaches a boil, let it sit for one to two minutes.  Then briefly rinse the tea once or even twice.  I’ll repeat that, RINSE the tea…for about two seconds once or twice.  Doing this removes chalkiness and loosens the dry leaves which have typically been stored in tightly compressed cake shapes.  Next, submerge the leaves in the hot water and count just 25 seconds before removing them from the water.  Now you have tapped into the earthy depths of a pure Puer experience.  Don’t toss your wet leaves away, they’ll have enough flavor to provide you as many as ten more cups.

The other key to Puer is in how the tea leaves are processed from harvest to storage.  Puer, unlike most teas, is not roasted or heated much during processing.  It is a raw tea. That means microorganisms that naturally live on the leaves remain alive to ferment the leaves slowly over time giving a unique flavor.  The raw leaves are wilted in the sun, then dried and rolled, then compressed into cake shapes and wrapped in paper that allows some degree of airflow during storage, never sealed in tins or other air tight packaging.  The microbial fermentation continues and the tea improves as it ages.  It takes about 5 years to reach a respectable earthy smoothness minus youthful pungency.

The aging process can continue for as many as 65 years. For that reason, Puer is one of the few teas that actually has a vintage.  Vintage Puer over 10 years old is prized.  Just last year, CCTV News of China reported that costs for it had soured higher than gold!


So that’s the traditional Puer, a.k.a. Raw Puer, but in recent times there’s been another version of Puer called Ripe Puer, a.k.a. Black Puer, where the fermentation has been accelerated.  It was developed in the 1970’s. The difference is that before compressing into cakes, the leaves are wet, put in piles, and tossed now and then for about 70 days.  It’s a bit like composting.  Then the leaves are dried and pressed into cakes.  Ripe Puer cakes need about 4-5 years for maturity and then can continue to age for up to 25 years. One result of the “composting” step is that much of the caffeine content leeches out, and so Ripe Puer has good reason to be considered one of the more relaxing teas.  So remember, when you purchase your Puer, make sure you clarify whether you’re getting the traditional Raw which has regular caffeine content, or the Ripe with less caffeine.

So Raw or Ripe, here’s the secret to Puer – seek high quality tea aged at least 5 years, rinse it twice and steep it gently.  You won’t be disappointed.
at 11:16 PM