What! Coffee in a Tea Bag?

Don't be surprised on your next flight if your coffee comes in a tea bag.  When I was flying Southwest the other day, I decided to forego my usual tea and have coffee.  It came in a tea bag!
Looks like some coffee companies want to get in on the tea bag business. I do not know much about coffee, but I know a little about tea bags.  Today, tea bags are so common that it is hard to find loose leaf tea in the average U.S. supermarket.  But just over 100 years ago, that was not the case.
That's because of the New York City tea merchant, Thomas Sullivan. The story goes that in 1908 Sullivan designed a silk tea bag as a cost cutting method of providing samples of his teas.  His confused customers mistakenly used the bags to brew their tea and then became enamored with this new convenient style of tea making. [1].
While Sullivan may have popularized the tea bag, he in fact was not the first inventor of the tea bag.  A few years earlier in 1903, Robert C. Lawson and Mary McLaren of Milwaukee, Wisconsin received a U.S. patent for their tea bag design.  [2].  They were issued U.S. patent 723287 for a “novel tea-holding pocket constructed of open-mesh woven fabric, inexpensively made of cotton thread.”  [2]
Given the popularity of the tea bag, the question is, why hasn’t the coffee business been in on the act?  I asked a coffee barista at Sauf’s Coffee at North Market in Columbus Ohio about coffee in tea bags.  She had never even heard of coffee in a tea bag and her company doesn’t sell it. 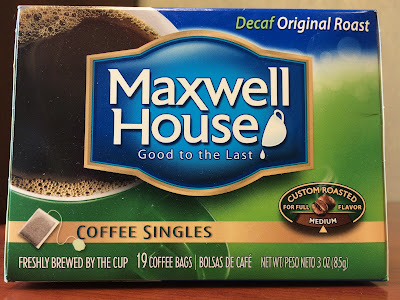