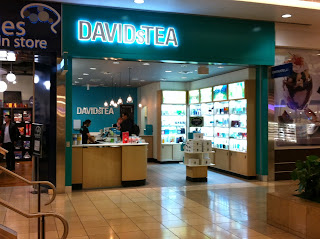 I just had a David'sTea experience!  I’d been hearing about this Canadian tea company for a while and I’ve even passed it a few times in the mall.  I had been pretty disdainful about going in because I suspected it was something of an irreverent fast food nation version of a tea shop.  David’s is a retail store selling only dry leaf tea and it is a fast growing chain from Canada with about 100 stores there and over 10 stores in the U.S. so far, in California, Massachusetts, New York , Connecticut and Illinois.[1] The company was founded in 2008 by a 28 year old tea lover and his business retailer cousin.[2]


David’s tea is tea shop with white and blue decor and brightly lit display shelves.  This and even the unusual names of their teas seemed a little odd to me.  But it happened that I was passing by the store and the staff handed me a sample.  I tasted it and it wasn't bad at all, not at all. Then what really caught my attention was their Red Velvet which I saw in an open container someone next to me was smelling.  I took a smell, too.  It reminded me of a birthday party.  So I spoke to the sales clerk a little and she asked me about what teas I liked.  I was still skeptical as I was telling her about my favorites.  She brought out a few different dry leaf mixes in tins for me to sniff.  I was impressed that a pretty high percentage of what they have is organic.  The tea mixes also smelled good.

Actually, they smelled sooo good I kind of got carried away with smelling different mixes.  They had the Red Velvet which smells like cake; they had a Pumpkin Chai; they had a Very Berry that had dried super berries in it; they had a roibus; they had a yuerba mate with chocolate in it; they had another flavor that had tiny balls of sugar that looked like gold but dissolved in water.  What a surprising number of creative ideas! 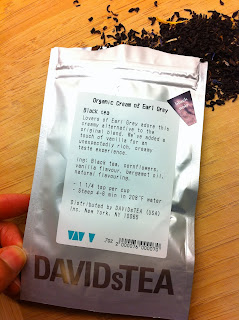 The Cream of Earl Grey, which is heavy on the bergomat and with essence of vanilla, caught my fancy.  I was sold…I couldn't resist buying.  My tea was packed for me in a little plastic satchel.   I think what really reels people in is you can buy any amount you want.  It’s sold as loose tea by the weight, not in tea bags.  I just bought a small amount which I'm going to have at breakfast.  I can tell already I'll be won over… we'll see how it goes in the morning.

It’s now the morning and I’m ready to report my findings.  The Cream of Earl Grey had layers of flavors and was more sweet than I’d expected.  It had a long lingering after taste.  Maybe a little too much personality for a morning wake-me-up, my more meditative, introspective moment.  It seems perfect, though, for a more social time, like after a lunch with friends or a celebration.  With so many tea options, David’s Tea just may have a flavor for every occasion.
___________________________________
[1] http://www.davidstea.com/store-locator
[2] https://www.davidstea.com/about-us
at 12:42 PM